There are only a few days left until the opening of our Bed & Breakfast and the work is almost done. We are looking forward to the big day. Shortly we will show you the first pictures of the new reception area that will be as comfortable and pleasant as possible.

You are probably wondering, why “Schollese Pension / Bed & Breakfast” got that name and not the name of the Hutchinson family who runs the B&B.

Well, the B&B was named “Schollese” because the building was known and referred to by the locals as “Schollese” after the name of the the family who lived there in the 19th century, the “house name”.

House names were (and still are) very commonly used in the Hunsrück. It doesn’t matter who lives in a building nowadays, the house name survived generations and so it happens that John Doe, living at x Hauptstrasse in Village y in a building called “Theise” is often betten known as “Theise John” than under his real name.

[1] Identification of the location of the smallest settlement unit, especially in rural areas
[2] transition of [1] on the residents of the property as a dwelling place name

In the case of “Schollese” that was the name of the residents of the farm. And from the property the name was transferred to the following people.

“House names” have a long tradition in the Hunsrück and many other, mostly rural aeras. But even in large cities there were house names, which are related to a particular feature of the houses (eg a picture on the wall, or a sign above the entrance) and made the distinction and addresses of residents from the Middle Ages to be. Preserved are the names most frequently in the names of restaurants (“Zum wei&szlig;en Rössel”) or pharmacies (“Schwanenapotheke”).

Even in England, the home of the Hutchinson family, house names (“house names”) have a long tradition. The names of the houses being either historical (“The Old Vicarage”), related to animals (“Cookoo Cottage”) or referred to the location and views of the building (“Meadow View”). 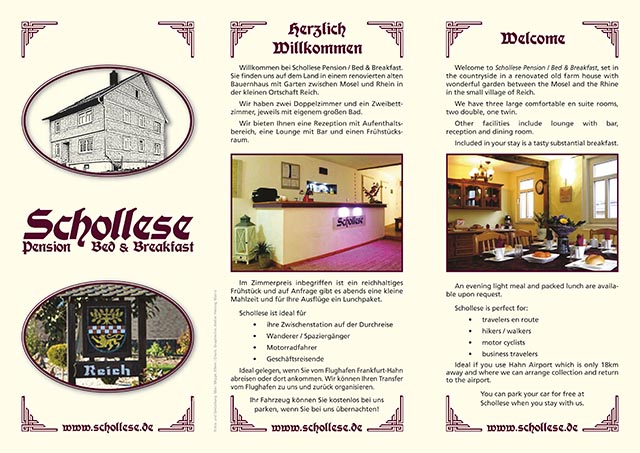